Designated a Town of Huntington Historic Site in 1980, the Oakes Cemetery is hidden in the heart of Old Chester Hills.  Located at the intersection of Beaverhill Lane and Whistlerhill Lane, the cemetery is in memory of Ephram Oakes, a soldier of the American Revolution, who fought with General Montgomery at the Siege of Quebec 1753-1846.  Ephram Oakes was born in 1753 (actual birth date unknown) and died April 21, 1846 at the age of 93.

According to the Town of Huntington's Historian, Richard Huges Esquire:

There is evidence of 13 burials in Oakes Cemetery, three of which were marked with simple field stones.  Three other grave markers are damaged or missing.

However, based on earlier inventories of the cemetery, we know who is buried in nine of the graves: 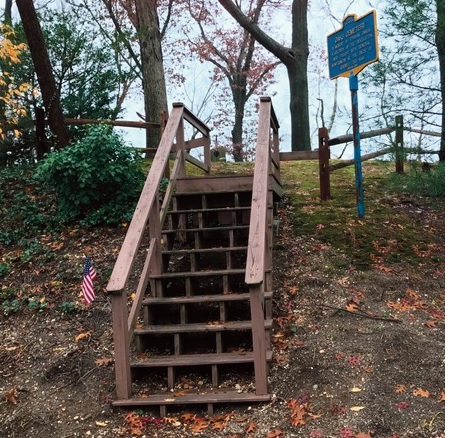 Ephram Oakes, a veteran of the American Revolution is, of course, the most famous of the group.  The rest appear to be family members, although unconfirmed.  According to legend, Ephram Oakes lived at what is now known as Godfrey Lane, which was built around 1750, presumably by his father.  Ephram, who was born in 753, would have grown up there.

The cemetery was adopted by the Old Chester Hills Civic Association in 1985, and the civic association maintains and upkeeps these historical grounds.